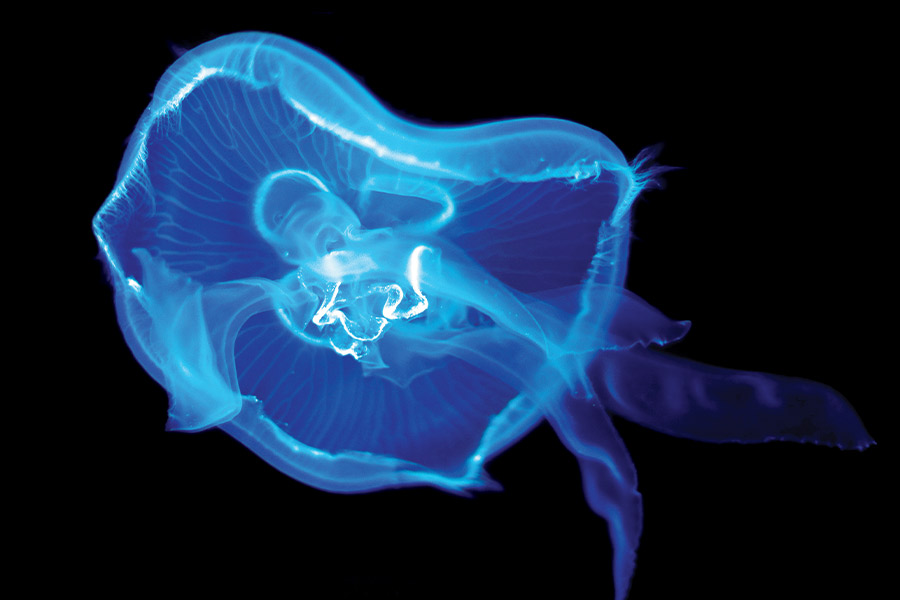 Moon jellies eat plankton and small fish. At the aquarium they eat brine shrimp as their main diet.

The moon jelly differs from many jellyfish in that they lack long, potent stinging tentacles. Instead they have hundreds of short, fine tentacles that line the bell margin. The moon jelly’s sting is mild and most people have only a slight reaction to it if anything at all.

The moon jellyfish are often found washed up and withered on the beach even though they are not fragile animals. They survive long sea journeys and battering by waves. Its umbrella may be as large as 18 inches across and looks like a flying saucer. The umbrella is separated into eight equal parts, each of which has many small tentacles that contain stinging cells to help the jellyfish get food and defend itself. These stinging cells are like tiny harpoons and are triggered when the tentacle is touched, and even a dead jellyfish can sting. Because of the sting they deliver, moon jellyfish are considered annoying at beaches and to divers. The main predators of moon jellies are sea turtles and sharks, thus endangered predators must be protected to control the population.