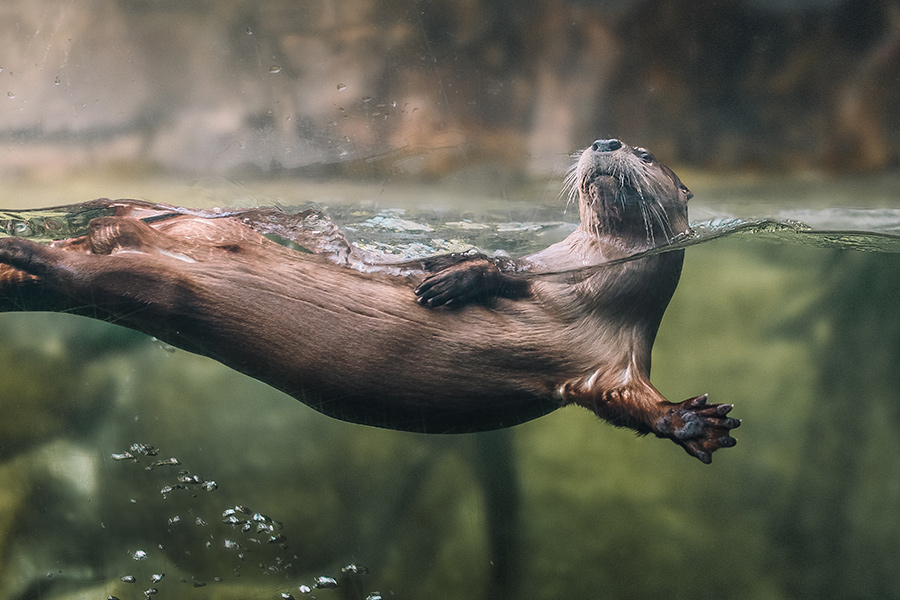 Live in coastal estuaries, rivers and even mountain streams. Sightings of river otters in the wild are rare because they prefer uninhabited areas with clean, clear water where food is abundant.

River otters eat a variety of fish such as suckers, carp, and catfish. Other food items include amphibians, mice, small rabbits, turtles and even bird eggs. Diet is reflective of the otters’ habitat. Coastal otters feed on clams, while otters in the mountains eat lots of crayfish.

If you have ever seen a river otter, whether it was at an aquarium, a zoo or out in the wild,you have probably observed the playful nature of these animals as they frolic in the water. Otters frequent a variety of aquatic habitats from mountain streams to salt marshes, but as an aquatic animal otters have had to adapt a way to fight the loss of body heat while spending all this time in the water. Their lustrous coat keeps heat from escaping their bodies while in the water. An otter’s fur is thick, containing about 156,000 hairs per square inch, creating almost a waterproof seal over the animal’s body that insulates it in the water. Unfortunately, the very same adaptation that has helped otters to survive and hunt in aquatic habitats has also been their downfall in many areas. Otter pelts have been widely valued in making fur coats, hats and gloves and the over hunting/trapping of this species has reduced a once wide ranging species to one that has been virtually eliminated across much of its native range.

River otters are sensitive to the presence of humans. Habitats far and wide have been ruined by development and increased boat traffic; both are large factors for declining river otter populations in some areas. Populations of river otters are low, even in the best habitat. River otters have historically been hunted for their fur, which is popular because it resists cold with an outer coat of coarse guard hairs, plus a dense, thick undercoat that helps to “waterproof” the animal. Today, over 30,000 furs are still sold annually in the United States and Canada. River otters in the wild need our efforts to make sure they do not end up endangered or extinct. Limiting the amount of garbage in otter habitats is one small way people can do their part. Becoming a volunteer in South Carolina?s annual Beach Sweep/River Sweep – a joint program of the Department of Natural Resources and SC Sea Grant – is a way of becoming involved and aware of the growing problem of habitat pollution. North American river otters have been almost eliminated across their native range by the loss of fitting habitat combined with the pressures of hunting/trapping for the fur trade. Despite all of this, river otters do not receive any protection under federal or state the law, and South Carolina still maintains a hunting season for otters from November 24 to March 1. Canada and the eastern and central United States