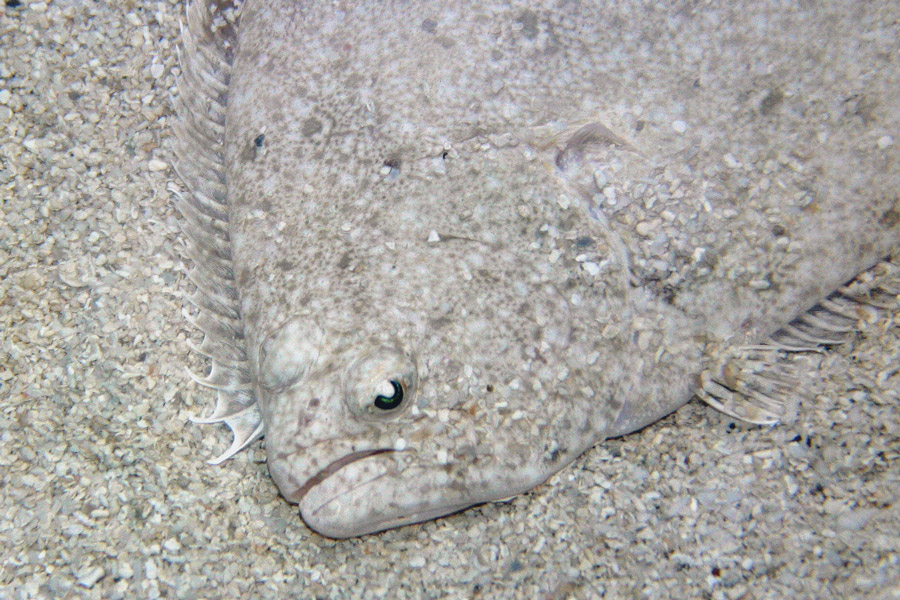 Southern flounder are commonly found on the sandy, muddy or rocky bottoms of the shallow waters of bays, estuaries, coastal marine areas, rivers and lakes.

Young flounder prey on small fish and a variety of small invertebrates, including shrimp, insects, worms, and crabs. Adults feed mainly on smaller fish species (mullet, anchovies and menhaden), but will supplement their diet with some invertebrates.

Flounders belong to a group of flatfishes, which are quite distinct from other groups. Flatfishes are bottom-dwelling fish that have both eyes on one side of their body, thus allowing them to see with both eyes, as they lie flat on the bottom. These fish begin as free-swimming larvae and juveniles until one eye begins to migrate to the other side of their head as a part of the metamorphosis that occurs as a flatfish matures to adulthood and settles to the bottom. This strange development is often cited as an example for the Theory of Evolution. The southern flounder takes advantage of its bottom-dwelling lifestyle by lying very still and flat against the bottom before launching a surprise attack on unsuspecting prey. To add to this fish’s camouflage ability, flounder can also change color to help match, and almost become part of, the substrate over which they reside.

Southern flounder play a vital ecological role in the food chains of a variety of coastal habitats. This species is considered a near-top predator in these shallow water environments where it utilizes its cryptic coloration to blend in with sand, muddy or rocky substrates. Flounder lie on the bottom and ambush common prey like mullet, anchovies, menhaden, insects, and a variety of crustaceans. As a top predator, flounder are very important in controlling the populations of a variety of common shallow water species. Southern flounder are highly prized by both commercial and recreational fisherman. Its tasty flesh has contributed to its popularity in restaurants and in fish markets. Despite the pressures from the commercial and sport fishing industries, southern flounder have been able to maintain stable populations both because of their reproductive biology and management practices at state and local levels. Today, South Carolina maintains a 20 fish per person per day limit, and a 12-inch minimum size limit on both commercial and recreational flounder fishing. Tropical and temperate waters of the eastern Atlantic

Small fish and a variety of small invertebrates